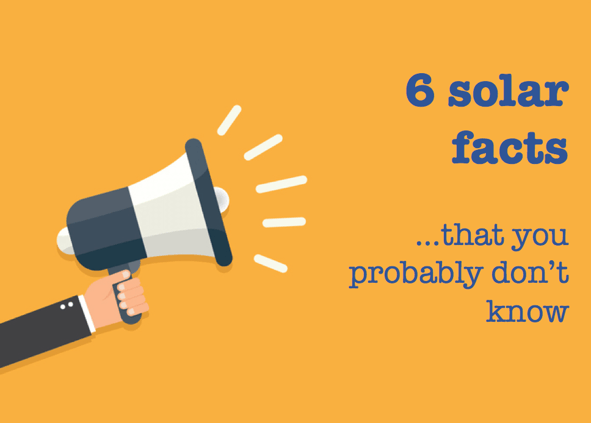 Solar energy is all the rage. What could be more extraordinary than getting the power that heats our homes, charges our devices, and makes all of modern life easier...directly from the sun?

Of course, the sun has always been there as an untapped energy source, and we’re constantly learning more and more about the possibilities.

You might already know quite a bit about it, since it’s become such a popular topic. But, it’s a safe bet you don’t know all of the mind-blowing solar power facts out there.

Read on, and quiz yourself on the following solar energy facts to really be ‘in the know’.

1. The sun is the most abundant energy source on earth

The sun gives us heat and light every single day, but a little known fact is that the sun also provides more than enough energy to meet the entire world’s power needs, many times over.

It’s estimated that 174,000 terawatts of solar energy is constantly hitting the earth’s surface. That’s greater than 10,000 times all the energy being used around the world!

2. Solar is much easier on greenhouse gas emissions than fossil fuels

While we look towards a future where renewable sources of energy are essential, solar turns out to be an amazing resource – and much healthier for our planet.

According to studies by Working Group III of the International Panel on Climate Change, renewable energy is much easier on the atmosphere than oil, coal or natural gas over the lifespan of any given power source.

That means less contribution to greenhouse gas emissions and global warming, and a cleaner, greener future for our world.

3. To meet climate goals, we’ll have to depend on solar energy

Reducing the effects of climate change means changing the way we use energy. And we will have to rely more on the sun’s power to get there.

According to the International Energy Agency, in order to keep global temperature from rising beyond 2°C from what it was before the Industrial Revolution, solar energy will likely play a commanding role in our energy consumption. In one of the proposed scenarios, solar energy would account for greater than 10% of the earth’s electricity usage by the year 2050.

4. Solar energy is creating an explosion of new jobs

Increased interest in solar power will create huge growth opportunities for local economies, as well as the global economy.

In the U.S., for example, jobs are being created in the solar energy sector about 6 times as fast as in other industries. In New Zealand, solar power adoption is poised for growth in the coming years, as demand from homeowners and businesses for cost-effective solar power increases every year.

That will yield, among other things, a healthy job market.

5. The first silicon solar cell – the ancestor of all solar devices – was created in the year 1954

Harnessing solar power for technology isn’t a new idea. While public awareness of solar has steadily grown over the past decade, a huge breakthrough occurred a whole generation ago, signalling a new dawn for innovations in solar tech.

The American company Bell Laboratories produced the first battery made of silicon strips in 1954, heralding the possibilities of an energy source that will never run out. The New York Times announced the invention as the likely ‘beginning of a new era’, in which the sun can be used to power daily life.

6. The space industry was a pioneer in solar energy usage

It’s no coincidence that space exploration – the study of all things beyond our home, Planet Earth – was powered by the sun much earlier than other human ventures were.

As far back as 1960, spacecrafts were harnessing the sun’s energy for power. One satellite, Vanguard 1, is the first ever to be powered by solar cells, and has covered over 6 billion miles in its orbit. (And it has the distinction of being the oldest man-made satellite still orbiting our planet.)

We often hear of solar as an exciting new energy form that will play a big role in a hopeful, sustainable future. But these 6 facts are just part of the bigger picture of the sun’s power and all it has to offer us!